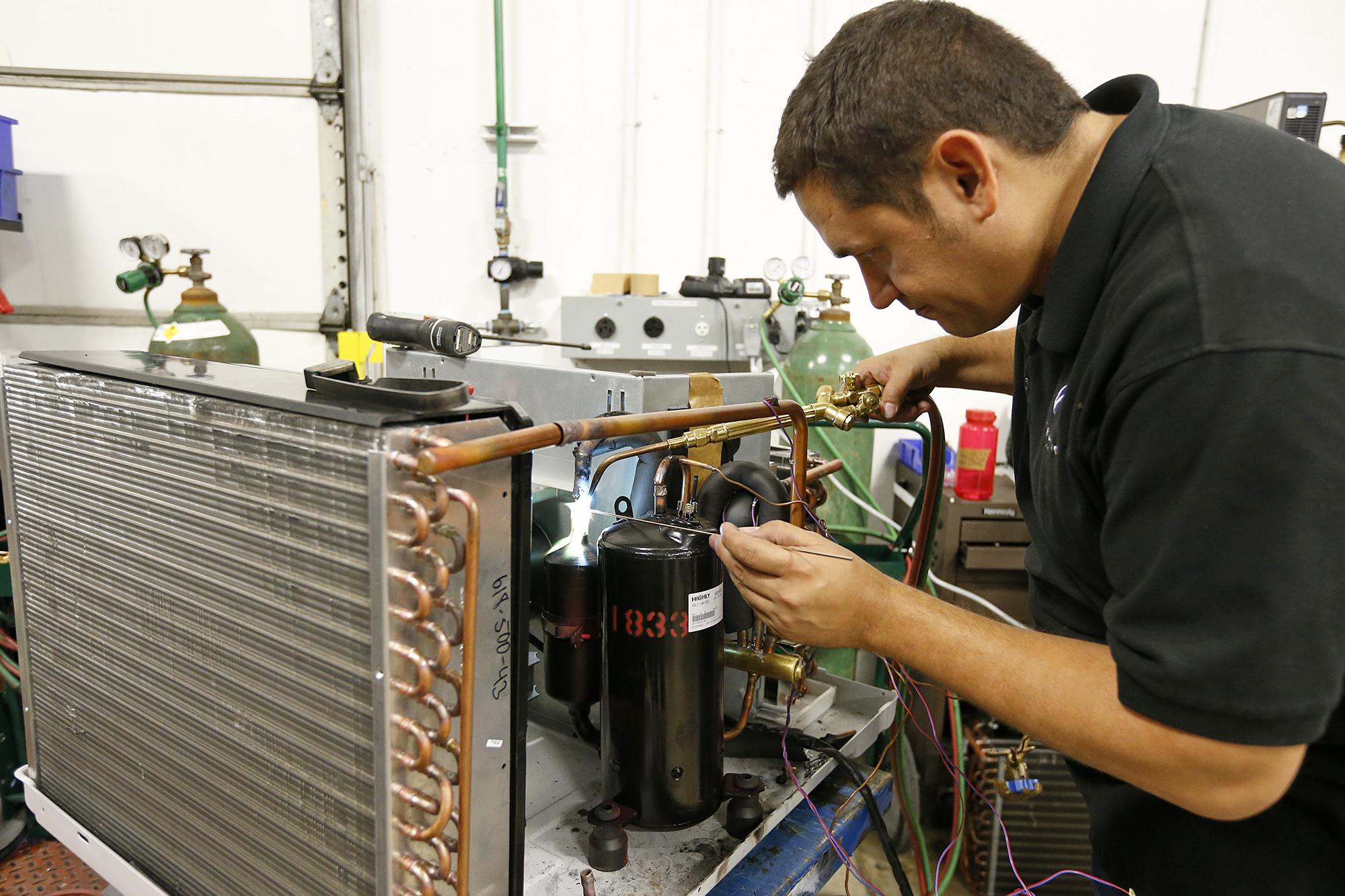 The folks at Friedrich Air Conditioning got an odd call a few years ago when a local woman tried to persuade the San Antonio company to take her old unit back.

She found herself in an extended game of phone tag, bouncing around from one Friedrich employee to another. Friedrich doesn’t take back old air conditioners, but she persisted. She had a hunch the company would want this particular hunk of metal.

“We get probably 60, 70 thousand calls a year in our call center,” Friedrich CEO Chuck Campbell said. “So somebody calling us saying, ‘Hey, would you like an old unit?’ — What a bizarre call. I don’t even know how it filtered up the chain of command to someone who listened.”

She eventually persuaded someone to lend her an ear, and her hunch proved correct. She explained that the unit wasn’t just old — it was really, really old. Even now, cleaned and shined, it is still the color of rust. But peering through the vents on the front of the machine, one can see the serial number: 0004.

This was one of the first air-conditioning units Friedrich ever made, back in 1952, and it still works.

It is fitting that the Alamo City, baking under the South Texas sun ever since it was founded three centuries ago, would be home to key pieces of air-conditioning history. The Milam Building, located at 115 E. Travis St., became the first skyscraper in the United States to have air conditioning in 1928, though the tower’s “manufactured weather” was provided by Carrier. 1935 saw the St. Anthony Hotel become the first hotel with a fully functional air-conditioning system. The patent for the air conditioner for the iconic Volkswagen van of the hippie era was filed by San Antonio resident Don Dixon in 1968.

Friedrich, which started as a furniture company in the 1880s and began to make ice-block coolers in 1923, joined the air-conditioning world with window units in 1952.

The Friedrich name is not limited to air conditioning in San Antonio lore. Ed Friedrich, the company’s founder, was the brother of Albert Friedrich, who opened the famous Buckhorn Saloon in 1881. But it was the air conditioners, which adorn the windows of buildings across the country, including the Flatiron Building in New York City, that made Friedrich a household name. The company even had stars advertise for the company, with actor Peter Graves of “Mission: Impossible” and “Airplane!” fame serving as a spokesman for the company and delivering the slogan “Friedrich: the Energy Economiser” in a 1976 television ad.

At one point, when Friedrich was manufacturing multiple types of products in San Antonio, the company employed about 1,200 people in the Alamo City. In addition to window units, the Friedrich name has been attached to the large, open air coolers found in grocery stores and the larger room units found in hotels. Developers have been trying to turn the site of one old factory on Commerce Street into apartments and retail space.

Friedrich transitioned from its downtown presence to a new location on the Pan Am Expressway in the 1970s and stayed there until 2011. Friedrich then moved into its new headquarters, located on Reunion Place near the San Antonio International Airport.

However, the last local factory closed in 2008, and all manufacturing is now done in Monterrey, Mexico. Today, Friedrich has about 120 employees based in the United States, most of them in San Antonio, said TJ Wheeler, the vice president of marketing and product management.

Though Friedrich no longer manufactures its units in San Antonio, it does perform its engineering work here. There was some thought given to moving the company’s headquarters to New York several years ago, Wheeler said. However, the deep ties to San Antonio easily won out.

“We are San Antonio. We are very San Antonio-based,” Wheeler said. “It’s very true to our brand and who we are.”

In addition to the new corporate offices, there is also an engineering facility a few blocks away. The facility, which is about 20,000 square feet and opened in 2014, tests potential innovations for the air conditioners by monitoring their ability to operate in extreme temperatures, among other measures. Lionel Lopez, the engineering lab manager, said his team will run hundreds of tests before they feel comfortable with an innovation.

Friedrich also wants to test competing products in the lab. They invite potential customers who claim the system they are using is quieter than Friedrich’s to come compare the product with a Friedrich model in the company’s sound room.

“We’ll test it exactly the way we test ours, in an apples-to-apples environment, at this test condition,” Lopez said.

“We are going to be much more customer-centric as well, not only product-centric,” Wheeler said.

In that training room, surrounded by the newest and shiniest products Friedrich offers, sits the old machine from 1952, a not-so-subtle reminder of Friedrich’s staying power — for customers, and for San Antonio.

COMING MONDAY in MySA: “The Eyes of Texas” penned by UT student from San Antonio.